What does mobile phone data reveal about Switzerland? 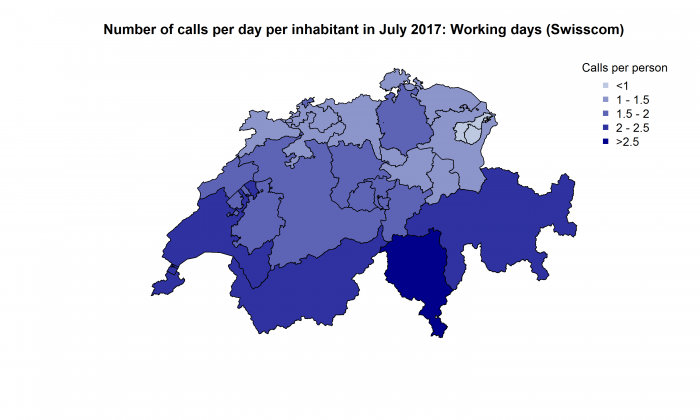 Mobile phone data has a vast scope. Our phones track our location, record social activities by listing who we call or message, and know what we like or what we’re looking for by collecting data on our online behavior and use of apps.

The recent Mobile User Demographics Challenge on Kaggle (by the Chinese platform TalkingData) offers some insight into the volume and precision of the information available on mobile users. The data challenge asks participants to predict the age and gender of Chinese mobile users based on their phone data, particularly the apps they are using at various times and places. For another example, check out the Development Challenge by Orange: It highlights the huge potential such datasets hold, especially for developing countries, where reliable data is often a scarce resource. The winning projects use detailed mobile phone data for urban planning in Senegal. Among other things, they predict electricity demand and model several socio-demographic factors relevant to urban design.

As the idea of open data spreads, an increasing number of mobile providers have started to offer free access to anonymized datasets.

On its Open Data Portal, Swisscom provides detailed data on the number of voice calls, the number of SMS and the data downloaded per Swiss canton in July 2017.

In what follows, we’ll take a closer look at the voice calls that occur on a busy working day. The graph below plots the number of daily calls happening over the course of the month. Clear patterns emerge: First, there’s a very significant difference between working days and weekdays. Second, as July evolves and the holiday season starts, the number of calls shrinks substantially.

When do people get up or go for lunch?

Calling behavior provides insight into people’s daily habits. The Swisscom datasets contain information on the number of calls per hour for each day. A massive share of calls is work-related, which explains the difference between working days and weekends. On working days, the Swiss get up quite early: At 7am, almost a million calls have already taken place. Calling peaks at 10am and decreases over lunch time. The workday seems to end around 5pm – with a sharp decrease in calling activity. On weekends, phone calls start significantly later, with Sundays being particularly quiet. 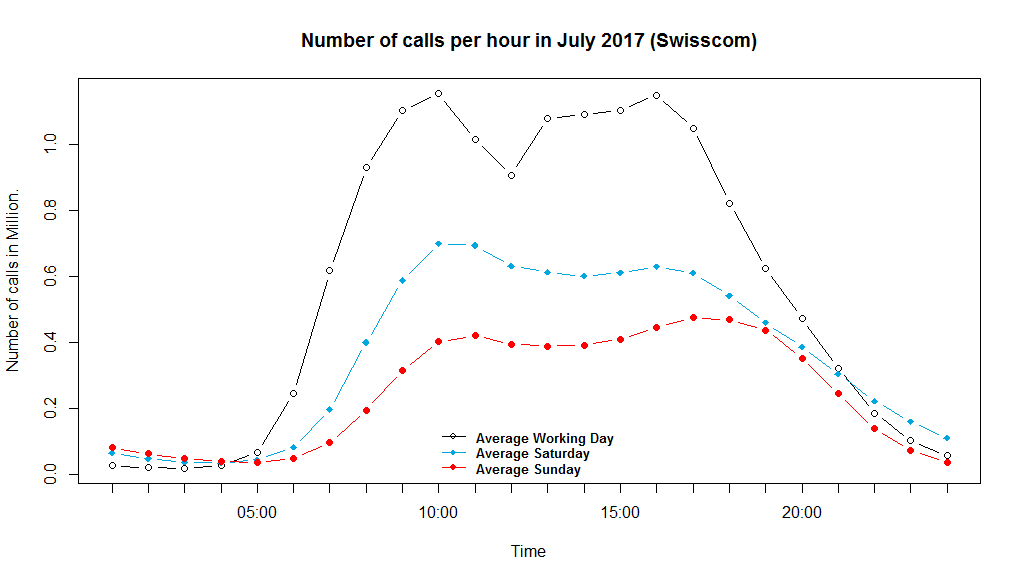 Given the structure of the available dataset, a comparative analysis across cantons seems natural. Dividing the average number of daily calls by each canton’s population yields a large variation (see the map below). In the two Appenzell cantons, less than 1 call per person and day is recorded, whereas the average Ticino inhabitant makes 2.6 calls per day. Overall, calling activity is significantly higher in the peripheral French- and Italian-speaking parts of the country than in the German-speaking part.

While the data provides a good general overview of the users’ behavior, regional differences may also be affected by local variation in the composition of users and market shares for certain products. In 2016, Swisscom had a share of 57.7% on the Swiss mobile market, with local market shares differing substantially. 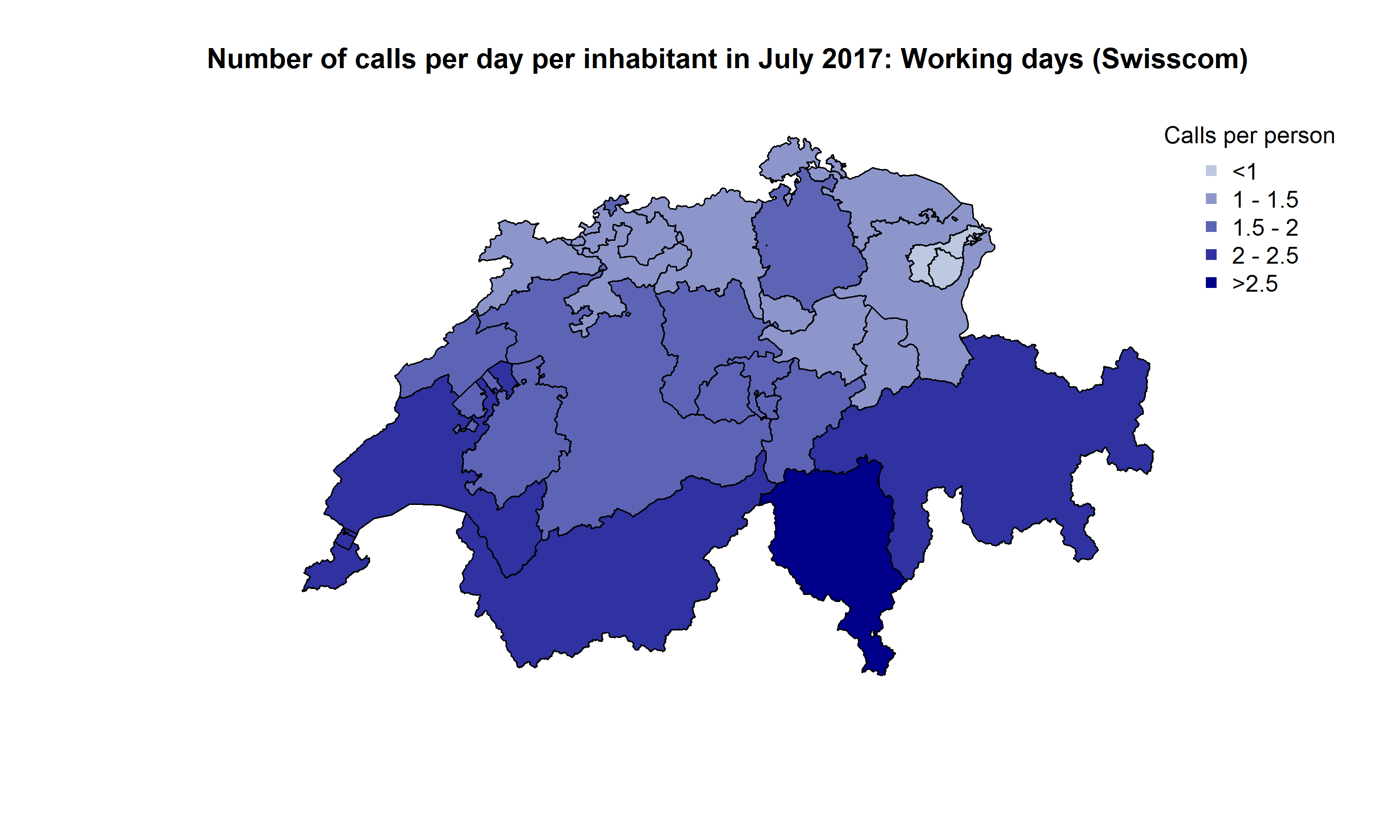 The next figure displays the calling activity on a working day in Geneva, Ticino and Zurich (calls relative to the busiest calling hour). Overall, the calling patterns run very similarly. The working day in Geneva seems to start slightly later, which translates into some lag of the lunch time and evening declines as well. Calling in Ticino seems to be focused on mornings and to level off in the afternoon. 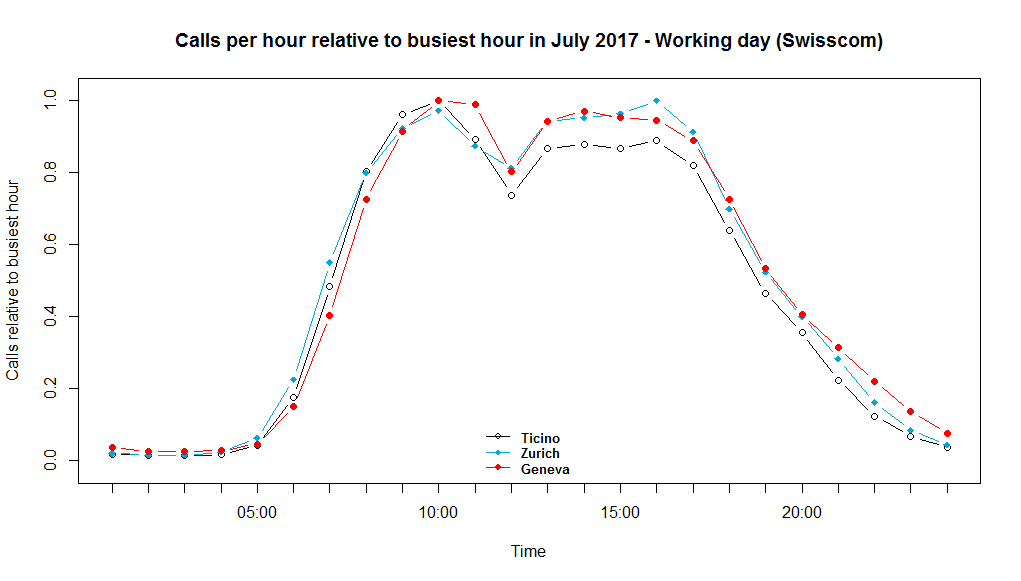 The data for Sundays reveals that Swisscom clients in Ticino take some break from calling in the afternoon. In Geneva, both Saturday and Sunday nights seem to last longer than in Zurich or Ticino. 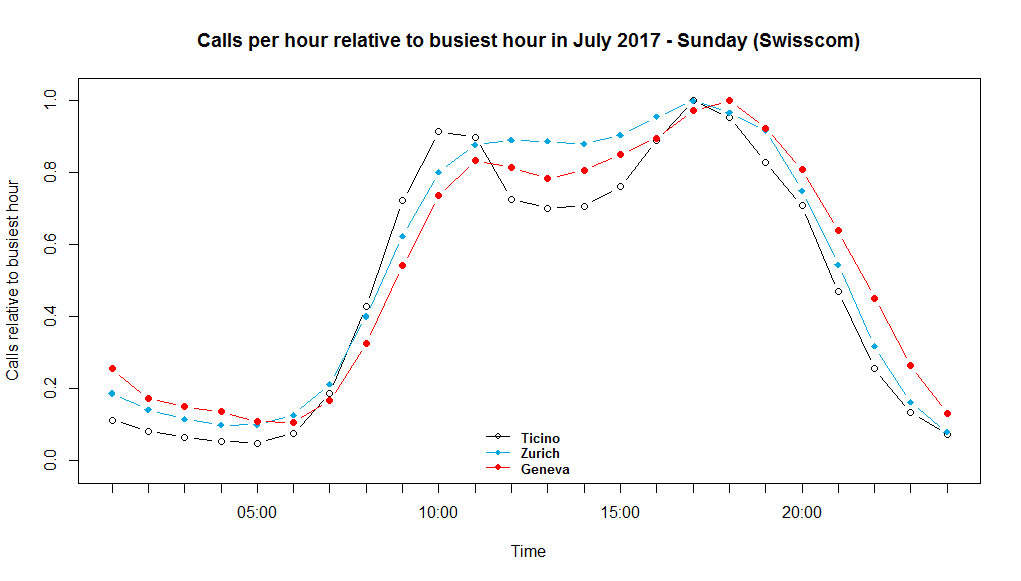 Some insights into the daily habits of Switzerland’s inhabitants can be deduced even from crude datasets like the one examined here. We’re curious what the next uploads on Swisscom’s Open Data Portal will reveal.