How much do data scientists earn in Germany in 2022?

Ten years ago Thomas Davenport and T. J. Patil were already advertising data science as “The Sexiest Job of the 21st Century” in the Harvard Business Review. Since then, a lot has changed in many areas of business pertaining to the use of data and data-driven insights. Over the last 10 years, more established companies invested in data infrastructure, data analytics and data science tools. At the same time, they need skilled people to support this development. Some of the largest companies such as Google, Facebook or Amazon even are almost purely data-driven companies with a clear focus on providing specific value from data.

Generally, their prediction has proven correct: The number of data science job postings has exploded over the last 10 years. According to a Statista survey, the average number of data scientists employed in a single company increased from 28 to 50 from 2020 to 2021 (among a sample of large corporations they surveyed). How does this demand translate into salaries, and how much can data scientists expect to earn on the German market?

In the workplace, salary figures are neither transparent nor openly discussed in most cases, and few reliable resources are publicly available. Glassdoor offers self-reported salary information by location and thus provides some insights into the salary structure of the German job market for data science. Figure 1 shows the reported salaries in a Box plot. On average, data analysts make EUR 53,000 plus additional pay of around EUR 4,000 a year, while data scientists generally earn median yearly salaries of EUR 66,000. On average, senior data scientists make more than EUR 86,000 per year, while lead data scientists report median salaries of more than EUR 106,000 a year, but these roles often require years of experience in data science as well as management skills. 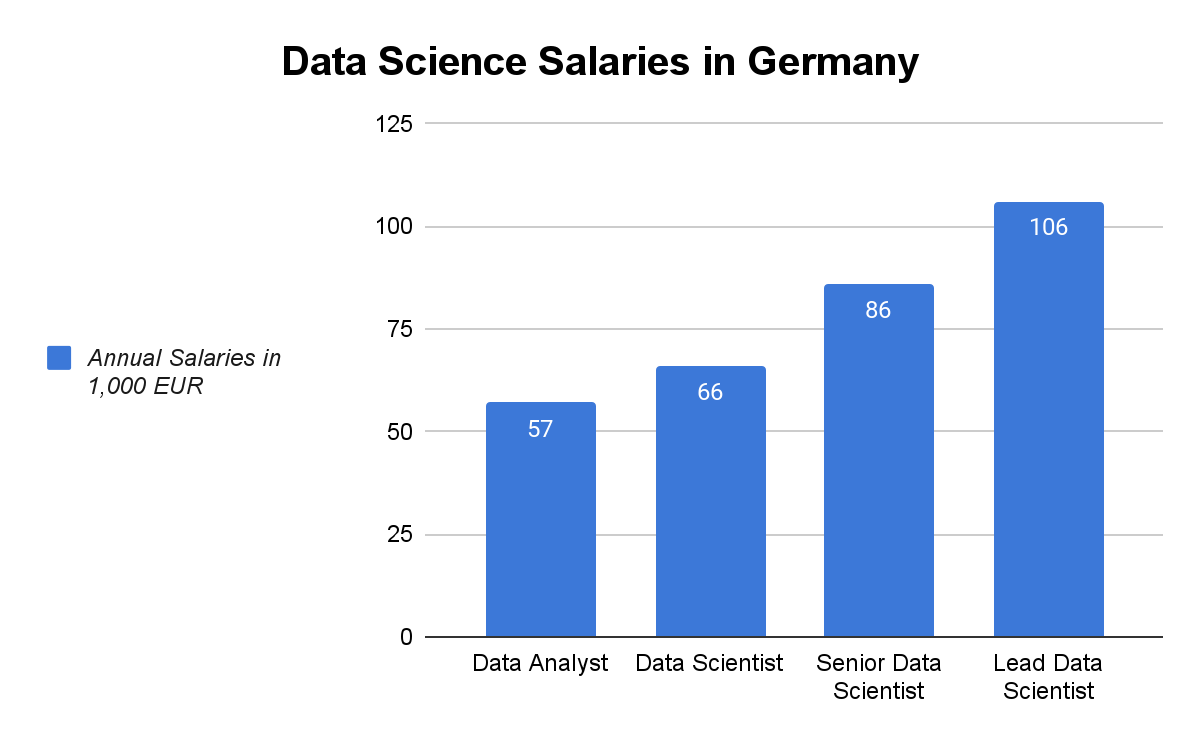 What has changed over 5 years?

We did our first analysis in 2017 - about 5 years ago. The founders of Datacarer were just about to finish their PhDs and everybody was already mentioning data science as one of the hottest growth markets. What has changed since then in terms of salary and in the overall market?

Starting salaries for Data Analyst and Data Scientist roles increased by roughly EUR 10’000 or about 15%-20% over 5 years. Given an inflation of about 8% (the latest increase in 2022 not taken into account) and nominal wage increase in the general economy of about 9% over the same time period, the numbers show that the field of data science definitely had a very positive development. The number of data science/data analytics roles grew strongly. Based on numbers from the US, the number of data science/analytics related job openings on platforms like Linkedin and Glassdoor increased by over 200% over the last 5 years. The same has happened in Germany. Based on data we collected from Indeed, a job aggregating website, there were 2800 data-related job openings in mid-2017. Today, there are over 10’000 job openings. Some of the increase might be due to changes on the platform and therefore measurement error - but it still indicates that data analytics/science related jobs in Germany have increased 200-300% over the last 5 years.

US salaries are significantly higher in expectation

According to the US Bureau of Labor Statistics, US annual salaries for data scientists range from around USD 59,000 up to USD 167,000. Some top data scientists at US tech companies may surpass this range by a large margin, though. While median US/German entry-level salaries seem comparable, the right tail can thus be expected to be much larger in the US. On the other hand, living costs tend to be significantly lower in German cities than around the epicenter of the US tech industry in Silicon Valley.

German salaries are comparable to the rest of Europe 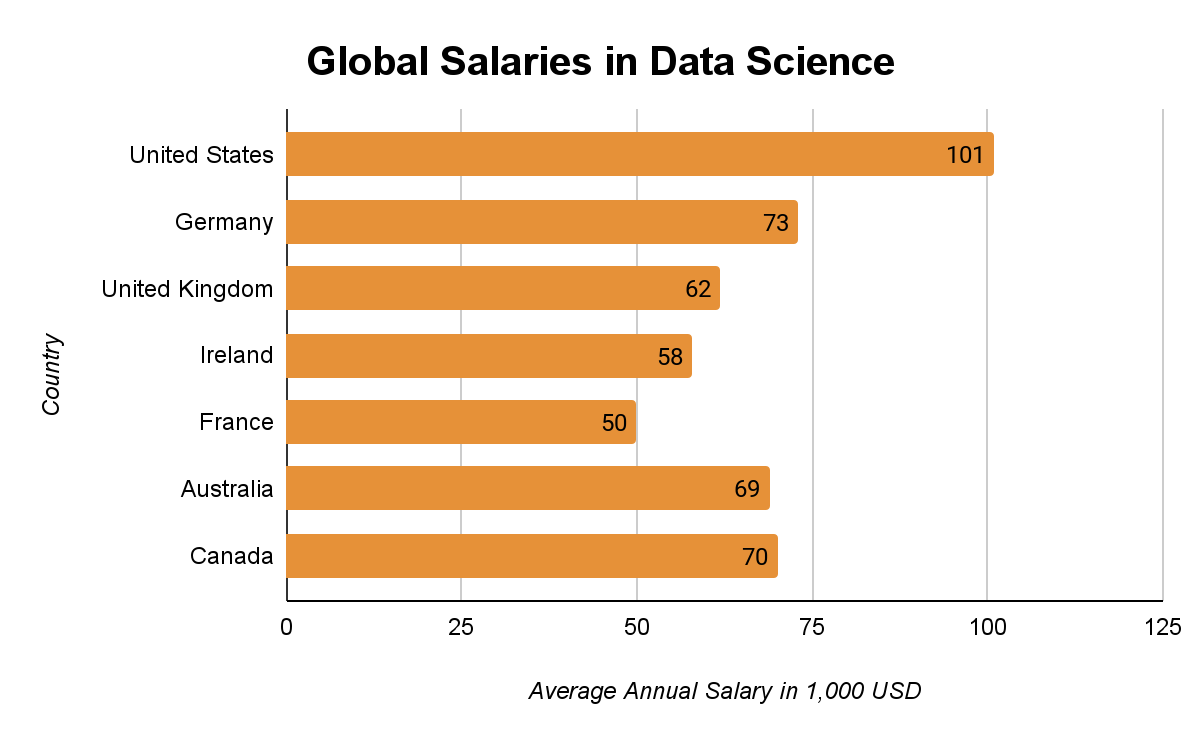 Overall, this article suggests that the market for data science and analytics talent has seen a tremendous increase - some of the benefits also go through the talents: With a salary increase of 15 - 20% over 5 years, also data talents had a good time!